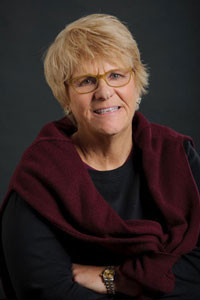 Joann Dost is not only a world-renowned golf landscape photographer, she is a pioneer of the art form. With professional roots in golf stemming from her tenure on the LPGA and Australian Tours and in photography from her studies with Ansel Adams, Joann possesses an unparalleled authenticity in the medium. With its notable classical beauty and almost painterly quality, her imagery has been sought, published, collected, exhibited and commissioned internationally over the past 30 years.

Competitive sport runs in Joann’s family with her father a former Olympic speed skater and her brother a former New York Met. She took to golf at the age of 15, excelling as a Junior, winning both the Maryland State and DC Junior Girls Championships after a mere two years playing experience. She became a teaching pro in 1970 and played as a professional on the Australian Tour in 1973-1974. Finishing third in Qualifying School, Joann became a Touring Professional on the LPGA circuit in1976. During her five years on the Tour, she had several top-10 finishes, shot a low round of 66 and finished third at the Ping Championship in Portland, Oregon.

It was her move to Pebble Beach in 1977 that would forge a new dimension in her love of the game. The magnificence of the Monterey Peninsula inspired her to purchase a Mamiya Sekor camera and begin to photograph golf courses. Surrounded by natural beauty and stunning golf landscapes, Joann staked her future through the eye of the lens.

Mentored by Ansel Adams, Cole Weston and John Woods, she honed her skills. Her talent quickly earned her a place of leadership in the field of golf landscape photography: the USGA assigned her to cover the 1981 Walker Cup Matches at Cypress Point. Subsequently, she was awarded the photography assignment for the 1982 Pebble Beach U.S. Open book. Despite the five U.S. Open events at Pebble Beach and hundreds of national and international tournaments Joann has photographed since, it is her timeless golf landscapes for which she has come to be known.

Over the years, Dost has mounted significant credentials, association memberships and awards. These include:

She holds among her personal highlights taking golf lessons from Lee Trevino, playing golf with Arnold Palmer on her 50th birthday and being asked to document Jack Nicklaus’ final Open Championship at St. Andrews.

Joann continues to be a trend-setter within the art form and the industry. Her travels across North America, The British Isles, the Far East, Australia and New Zealand continue as she captures the essence of golf course architecture and the spirit of the game through her photographs.

“Thank you very much for your assistance and for the prints we purchased for our outing last week in the Monterey Peninsula. They were magnificent and truly appreciated by those who won them with their play on the course! We always look forward to bringing clients out there and in the future, we will make sure to keep your prints in mind as a great gift and/or prize for the participants!”

“Just wanted to thank you again for all the photographs you sent! They look great in our new office.”

“In the world of of golf, there is only one Joann Dost. Not only has she become an icon through her photographic magic, she has become a friend to so many in the game, in all corners of the world….including me. Through many years of crossing paths with Joann from the cliffs of Cape Kidnappers, to the hallowed grounds of St. Andrews, to back home in our beloved Pebble Beach…I have grown to respect not just her work, but her commitment to any endeavor she undertakes…and more importantly, her love for the the game and the people she has met through it. She truly is one of a kind.”

“The images were fantastic and we had people who were not part of the event asking for one so we thank you for doing such a wonderful job and thank Joann for taking the time to sign them.”

“Trophies were very well received and we are looking forward to doing something like that for this event annually.”

“Just a note to let you know how perfect everything came out. Your service was excellent and I could never have pulled this off without your personal attention!”

” I received my print in the mail today and I think it is just beautiful.
I know my husband will love it in his office. Thank you so much!”

“Thanks for sending the shots.  I was able to share them with some of the team today and got lots of oohs and aahs.  These will definitely help us better promote The Inn & Links at Spanish Bay as well as celebrate its 25th Anniversary.”

“Please know how incredibly, above and beyond, helpful you and your staff were to “get ‘er done!” I’m very grateful for your help to make it happen. Kudos for your exceptional customer service and your kind and gracious assistance!!”

“I really appreciated your help when I was involved with the Realtors group. I still see the awards hanging in offices and homes (including mine).”

2002 INTERNATIONAL GOLF PHOTOGRAPHER OF THE YEAR